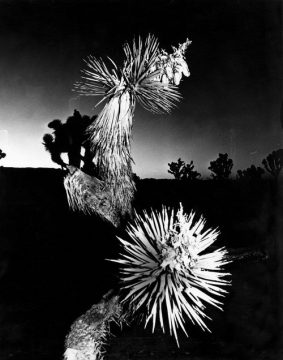 Chris Shaw captured a dark and spectacular vision of the Californian desert during the summer of 2013 while on a residency in Joshua Tree National Park. He took pictures in the early morning using a strong flash and printed at night in a make-shift darkroom in his bathroom, using an enlarger specially shipped from New York. In this bold and striking series of photographs, the Joshua trees and various desert cacti are transformed into haunting anthropomorphic figures and dancing icons. The prints themselves bear the marks of the ad-hoc printing process, with bleeding edges, fingerprints, off-kilter frames and Shaw’s signature hand-written titles.

Born in 1961 in Wallasey, near Liverpool, Chris Shaw studied photography at Liverpool Metropolitan College and at the West Surrey College of Art and Design at Farnham, graduating in 1989. He was taught by the likes of Paul Graham, Martin Parr, and Tom Wood, amongst others.
www.chrisshaw.carbonmade.com