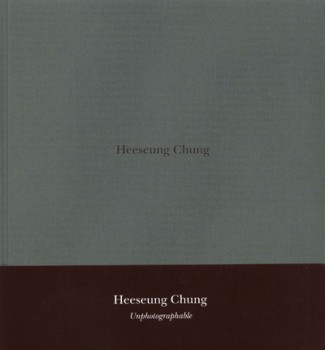 Accompanying the solo exhibition of Heeseung Chung entitled ‘Unphotographable’ at Doosan Gallery in March 2011, this catalogue documents Chung’s four series of photographic works completed between 2009 and 2010, including Reading (2010), Ghost (2009), Spiral Rind (2010) and Folly (2010), as well as the ongoing project ‘Still Life’. Includes Jisuk Hong’s essay and interview with the artist conducted by BODA Certer of Visual Art in 2010.

Born in 1974, Heeseung Chung lives and works in Seoul.

Doosan Gallery New York is Korea’s first non-profit organization to be recognized by the State of New York and the New York City Department of Education. With its prime location in Chelsea opened in 2009, the gallery brings Korean contemporary art more recognition and attention on the international stage.