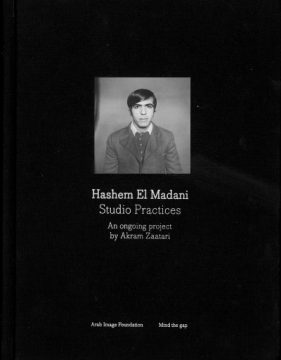 Hashem El Madani’s photographic work is tied to the city of Saida in South Lebanon where he has worked for over 50 years. Motivated by the wish to expand his business to the maximum, Madani set out to become the collector of portraits of all of Saida’s families – he claims that he has photographed 90% of the population of the city. His unique archive reflects the very fabric of an Arab town that has experienced major political and societal shifts.

Hashem El Madani set up his first studio in his parents’ living room in 1948. In 1953, as his business grew, he moved to a modern space on the first floor of the prestigious Shehrazade building, which he still uses today. The first publication of his work concentrates on the idea of the studio, exploring how Madani’s exemplary practice in studio photography is both descriptive and inscriptive of social identities. Madani’s studio created a site where individuals could act out identities using the conventions of portrait photography, with the poses inspired by the desires of the sitters. These photographs reflect not only how people look, but also how they desire to be seen.

Madani was born in Sidon to a father from Madina, Saudi Arabia, who was sent to Sidon as a representative of the Islamic Awqaf. Madani opened his photography studio, Studio Shehrazade, in 1953.

About the authors:
Lisa Le Feuvre is a curator, writer, editor and public speaker. In November 2017, she was appointed as the inaugural Executive Director of the Nancy Holt and Robert Smithson Foundation. Focusing on art as a powerful force to retune perceptions, Lisa Le Feuvre has a track record of world-class programming and effective leadership. At the core of her work is a dedication to supporting artists and inspiring audiences.

Akram Zaatari is a filmmaker, photographer, archival artist and curator. In 1997, he co-founded the Arab Image Foundation with photographers Fouad Elkoury, and Samer Mohdad. His work is largely based on collecting, studying and archiving the photographic history of the Arab World. Akram Zaatari has been exploring issues pertinent to post-war Lebanon. He investigates the way television mediates territorial conflicts and wars, and is particularly interested in logic of religious and national resistance movements, and the circulation and production of images in the context of today’s geographic division in the Middle East

About the publishers:
The Arab Image Foundation is a non-profit organization established in Beirut in 1997. Its mission is to collect, preserve and study photographs from the Middle East, North Africa and the Arab diaspora. The ongoing research and acquisition of photographs include so far Lebanon, Syria, Palestine, Jordan, Egypt, Morocco, Iraq, Iran, Mexico, Argentina and Senegal. To date, the collection holds more than 600,000 photographs.
fai.org.

Mind the gap is a Beirut-based design and communication agency with more than twenty years of engagement in branding, packaging, publication, signage, exhibition, digital and information design, for local and international clients. Eager to expand in sphere and in scope, we continually look forward to collaborate with invested people, on thought-provoking projects.
mindthegap.agency

The Photographers’ Gallery was founded in London in 1971, as the first public gallery in the UK devoted solely to photography. Free to the public, it offered a dedicated space for photography and photographers – the first of its kind in the UK – and brought the medium into sharp focus as an urgent and serious art form.
thephotographersgallery.org.uk