Under A Grey Sky 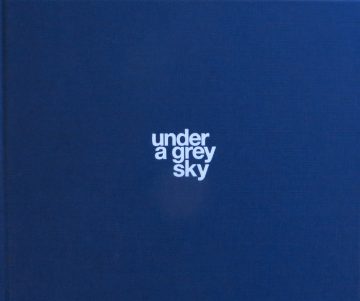 ‘Under A Grey Sky’
Simon Burch
The Gallery of Photography
English

As early as 1807 it was considered that peat could be used as a commercial fuel, before that any discussion about the boglands were concerned with reclamation for agricultural use. All through the 1800’s unsuccessful attempts were made to win turf commercially, and in 1872, when a miners’ strike in England increased the price of coal in Dublin by 100% , renewed efforts were made to exploit this natural resource. It was finally achieved by Sir John Purser Griffith at Turraun, Co. Offaly when in 1924 he built a power house, and with fully automatic machines he produced turf of a first class quality. His principles of bog drainage and operating of machines formed the basis on which the Turf Development Board and subsequently Bord na Mona worked, although both made many mechanical improvements. The culmination of these commercial efforts is now represented in the black landscapes of developed bogs, but this natural resource is finite and production is estimated to cease within 15 -20 years. Once this happens these exposed landscapes will disappear as the land will be put to agricultural and recreational use, and the visual evidence of such a significant national industry will be hidden.

About the Artist
Simon Burch is a professional photographer based in Dublin, Ireland. He divides his time between commissioned and fine art photography, and was awarded an MFA with distinction from the University of Ulster in 2014.
simonburch.com

About the Publisher
Gallery of Photography is the national centre for photography in Ireland. They showcase the best of Irish and international photography. The gallery is dedicated to developing a dynamic photographic culture, supporting artists in the production and promotion of their work. Their education programmes encourage engagement among wide and diverse audiences. Established in 1978 by John Osman, Gallery of Photography is a not-for-profit organisation, proud to be supported by the Arts Council and Dublin City Council.
galleryofphotography.ie