Gardens of Sand: Commercial Photography in the Middle East 1859-1905 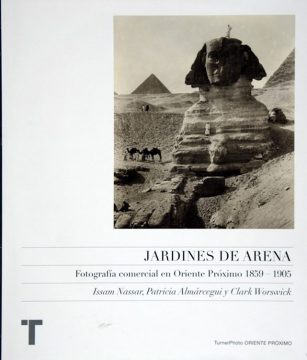 Between 1859 and 1905, a number of photographers working in Damascus, Mecca, Cairo, Istanbul and Northern Africa captured their landscapes, towns and millenary monuments, bequeathing an unprecedented visual documentation of the Middle East. Gardens of Sand is an editorial project co mpiling 100 original photographs, masterpieces mostly hitherto unpublished, taken between 1859 and 1905.

The archive illustrates the themes and specialities of the expatriate photographers of the second half of the Nineteenth Century: study portraits, Royal commissions, landscapes, inventories of significant monuments and buildings, orientalist scenes, steeped in classical European imagination. Nevertheless, the project also explores the confrontation between these pioneers and what was foreign to the West, between Western imagination and the visual reality of the Middle East, a meeting which ended up giving rise to a local photography, gradually moving further away from Western stereotypes.

Photographers such as James Robertson, Wilhelm Hammerschmidt, G. Lekegian, Antoine Beato, Felix Bonfils, Otto Shoefft, Emile  Béchard and Sulayman Al-Hakim of Damascus (the only documented Arab photographer of the Nineteenth Century), are represented in the book, which includes texts on the Middle-Eastern photography scene in that period and a critical analysis of orientalism and of photography as a means of conveying a reality free of prejudices.