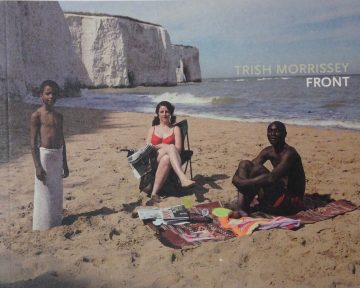 “Front” (2005-2007) deals with the notion of borders, boundaries and the edge, using the family group and the beach setting as metaphors. For this work, the artist travelled to beaches in the UK and around Melbourne. She approached families and groups of friends who had made temporary encampments, or marked out territories and asked if she could be part of their family temporarily. Morrissey then took over the role or position of a woman within that group – usually the mother figure. She asked to take her place, and to borrow her clothes. The woman then took over the artist’s role and photographed her family using a 4×5 camera (which Morrissey had already carefully set up). While Morrissey, a stranger on the beach, nestled in with her loved ones. These highly performative photographs are shaped by chance encounters with strangers, and by what happens when physical and psychological boundaries are crossed. Ideas around the mythological creature the ‘shape shifter’ and the cuckoo are evoked. Each piece within the series is titled by the name of the woman who Morrissey replaced within the group.

About the Author(s)
Pippa Oldfield is a photography curator and researcher with interests in the relationship between photography and war; women’s histories and experiences; and photography and visual culture in Latin America. She is Doctoral Fellow in the School of Modern Languages and Cultures and Head of Programme at Impressions Gallery, a public-funded centre for contemporary photography in Bradford.

Anne McNeill is the Director & Curator of Impressions Gallery, a Bradford based charity that helps people understand the world through photography.