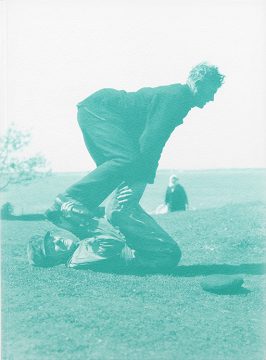 “Maximilian Stejskal carried out a study for his PhD thesis on “folk athletic” contests amongst Finland’s Swedish-speaking male rural population in the early 20th century.
For his study Stejskal biked across large swaths of southern and eastern Finland as well as Estonia for a month or two every year from 1929 to 1937 and then again in 1948, equipped with two bellows cameras and a box of photographic glass plates. On these excursions he systematically collected information about the traditional games, or “folk athletics” as he calls them, which were hardly practiced anymore even then. For the most part elderly farmers and craftsmen would tell him in detail about the exercises and tests of strength and courage with which they had tried to prove their virility in their younger days. According to these descriptions, their sons, relatives and farm hands were asked to perform the exercises in front of the camera so Stejskal could photograph them.
During his field research, which took over 20 years, Stejskal amassed a considerable collection of documentation, which he divided up into 11 different sections, one for each excursion. It comprises over two thousand handwritten pages of travelogs, descriptions of exercises, tables, sketches, musical and phonetic recordings and 433 photographs. This book focuses on a small selection of those photographs.”
– from the Edition Patrick Frey website.
About the Artist:
Maximilian Stejskal (1906-1991), an ethnologist and gymnastics teacher from Helsinki.

Marie-Isabel Vogel and Alain Rappaport are artists and scenographers based in Zürich.

The purpose of Edition Patrick Frey is to provide particularly young artists an opportunity and a platform with a first publication, but EPF has also been engaged in long-term collaborations with several artists such as Walter Pfeiffer, Peter Fischli & David Weiss, and Andreas Züst. With an output of up to 20 books per year, the publisher focuses mainly on photography, art and projects dealing with everyday and popular culture.