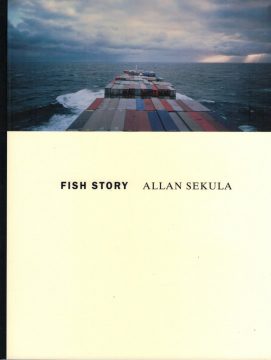 Completed between 1989 and 1995, Fish Story saw Allan Sekula’s career-long pursuit of a contemporary ‘critical realism’ reach its most complex articulation. Fish Story reconstructed a realist model of photographic representation, while taking a critical stance towards traditional documentary photography. It also marked Sekula’s ﬁrst sustained exploration of the ocean as a key space of globalisation. A key issue in Fish Story is the connection between containerized cargo movement and the growing internationalization of the world industrial economy, with its effects on the actual social space of ports.

The ambition of Fish Story lies both in its immense complexity and global scope and in its emphatic challenge to the dominant climate of postmodern theory and practice of the late 1980s and early 1990s. Fish Story occupies a pivotal place in a gradual shift, still nascent in the early 1990s, from a widespread culture of resignation and cynicism to one of renewed radical engagement in the art world.

About the Artist
Allan Sekula (January 15, 1951 – August 10, 2013) was an American photographer, writer, filmmaker, theorist and critic. From 1985 until his death in 2013, he taught at California Institute of the Arts. His work frequently focused on large economic systems, or “the imaginary and material geographies of the advanced capitalist world.”