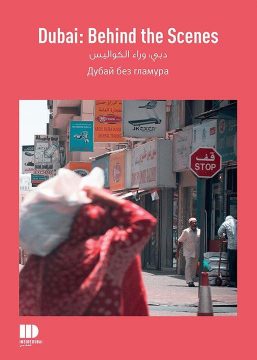 Dubai Behind the Scenes (DBTS) is a contemporary photographic account of everyday city life in Dubai behind the city’s ever popular image of opulence, modern architectural marvels and headlining superlatives. Captured and compiled by photographer and long-time Dubai expat Jalal Abuthina, DBTS is an in-depth visual journey through the streets of Dubai’s original downtown areas of Deira, Bur Dubai, and Karama. This visual narrative is an incomparable excursion into the more humane and under celebrated side of the city and it’s residents, and is presented in an engaging and educational style that is a true eye opener for anyone not familiar with the older districts of the city. In May 2016, images from the book were featured on Becky Anderson’s “Connecting the World” show on CNN international and since it’s launch has received an overwhelming amount of positive reviews from several major news and art publications in the country such as The National and Harpers Bazaar Art Arabia to name a few. DBTS also features an introductory foreword and historical account of the city by renowned urban historian and author Yasser Elsheshtawy, Associate Professor of Architecture at United Arab Emirates University, Al Ain.

About the Artist
Jalal Abuthina has lived in Dubai since 1993 and has spent more than a decade taking photographs of Dubai’s older neighbourhoods such as such as Satwa, Deira, Karama and Bur Dubai.

About the Author
Yasser Elsheshtawy is an independent writer and researcher and an Adjunct Professor of Architecture at Columbia University, GSAPP. He was a Professor of Architecture at United Arab Emirates University, Al Ain, where in addition to teaching he also ran the Urban Research Lab. He was appointed as the curator for the UAE Pavilion at the 15th Venice Architecture Biennale in 2016. Considered an authority on urbanism in the region, his scholarship focuses on urbanization in developing societies, informal urbanism, urban history and environment-behavior studies, with a particular focus on Middle Eastern cities.
sheshtawy.org

About the Publisher
Inside Dubai is a collection of photographic cultural publications and tourist memorabilia products from Dubai. Produced as an alternative to the city’s PR driven and overtly commercial representation, Inside Dubai offers an in-depth visual account of the city that has been written, documented and communicated by some of the most locally knowledgeable artists and writers in Dubai.
insidedubai.ae