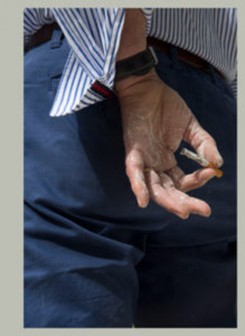 In “Domestic Flight”, the viewer is not con-fronted with traces of what has been. Rather, each scene allows us a glimpse into the action of the story Camille Picquot is un-folding. Released of its burden of proof, photography can now fully be applied to its new purpose: to visually narrate and suggest a fictional story. In her artistic work, Picquot is equally at ease with photography as she is with film. Applying and mixing common practices of these media, she never places one above the other, but rather reinforces them both. In “Domestic Flight”, Picquot does not shy away from adding a playful cameo of herself in the series, possibly hinting at Alfred Hitchcock’s famous appearances. (Rein Deslé)

About the Artist:
Camille Picquot (born in 1990, France) is a photographer and filmmaker. The universe that she presents is as attractive as it is uncomfortable. She plays the viewer by fiddling with accepted norms and expectations. She uses photography to build a fictional story, a method that we associate with film. As well, she turns certain conventions of cinema upside down by introducing unlikely actors in her film. Camille Picquot’s playful interaction with images and storylines results in a varied but consistent authorship. Camille Picquot lives and works in Brussels. Her first monographic publication, Domestic Flight (Art Paper Editions), is being launched together with the exhibition. This is part of the annual Young Belgian Photography cycle of the FOMU, Antwerp.

About the Publisher:
APE (Art Paper Editions) is an independent publishing platform founded in 2010 by Jurgen Maelfeyt of Ghent-based design studio 6’56”. APE focusses on the book as an exhibition space and makes publications in close collaboration with artists, writers, institutions, galleries, and other cultural protagonists. Publications are crafted to the highest standard. Many of our publications are acquired by institutional libraries such as Moma, Centre Pompidou and Macba amongst others.
artpapereditions.org