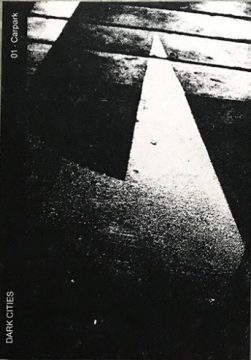 Dark Cities is a self-published project in a thin-cardboard folder containing 3 books that are 3 perceptions of Singapore, Tokyo and Seoul through the « lens » of a specific and unusual location: a carpark (01 – Carpark), a run-down tower (02 – Capsule), an old city quarter (03 – Euljiro). The original training as architect of the artist Shyue Woon is very present in this triptych that also carries a rather dark atmosphere.
The Carpark, a photographic novel of a space beyond place. Woon is the city’s refugee; where every inch of land is demarcated and set for a purpose, he is navigating its margins. The world he has created unfolds in darkness, yet gleams with colours made manifold by man.” Excerpt from The Carpark essay by Charmaine Poh, Artist, and documentarian.
It seems that we are exploring the Tower’s ‘consciousness’ as turning pages. We learn about the days of the Tower. However, what we see are not objective facts; It is just an imagination based on our own experiences. By exercising our imagination, we can see even the dream capsuled in the Tower.” Excerpt from Capsule Tower’s Dream essay by Kenji Takazawa, Photo Critic.

About the Publisher
The International Publishers Association (IPA) is the world’s largest federation of national, regional and specialist publishers’ associations. Its membership comprises 81 organisations from 69 countries in Africa, Asia, Australasia, Europe and the Americas. Through its members, IPA represents thousands of individual publishers around the world who service markets containing more than 5.6 billion people. Based in Geneva, Switzerland, IPA represents the interests of the publishing industry in international fora and wherever publishers’ interests are at stake.IPA was founded in 1896 in Paris by the leading publishers at the time. Its initial aim was to ensure that countries throughout the world showed respect for copyright, and properly implemented the (then) new international copyright treaty, the ‘Berne Convention for the protection of literary and artistic works’. And today, the promotion and defence of copyright is still one of IPA’s main objectivesSince its foundation, IPA also promotes and defends freedom to publish, a fundamental aspect of the human right to freedom of expression. Likewise, IPA stands for the promotion of literacy and reading, and has always been a meeting place for publishers to network, exchange views and conduct business. IPA is an accredited non-governmental organisation (NGO) enjoying consultative relations with the United Nations.