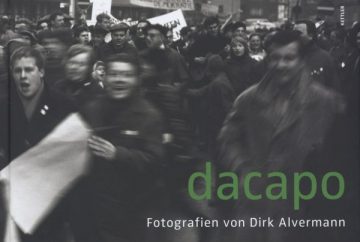 Many of Dirk Alvermann’s photographs are known across the worls, his pictures were published in magazines and newspapers such as Quick, Magnum, NBI, Die Tat, Deutsche Volkszeitung or Das Magazin, to name a few.

His passion though are the photobooks he creates and designs by himself. The layout of these books is still a reference to designers today. In 2008 he created the book Dacapo, a collection of works that he produced between 1956 and 1975.

About the artist:
Born in Dusseldorf in 1937, Dirk Alvermann documented life in his native city at the beginning of his career. The teenager captured the impressions of the destroyed but cosmopolitan city in the band “Little Paris”. He photographed women and men at work, upheavals and breaks in post-war history, children on the streets, political gatherings. His main focus was always everyday life.

About the publisher:
Verlag Kettler are a German publishing house, who pride themselves in combining first-rate, high-quality production with custom design.
verlag-kettler.de