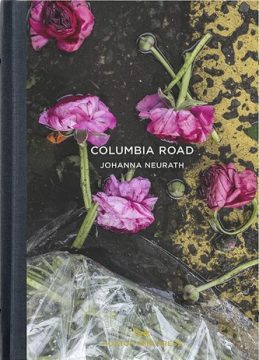 Book 7 from the series ‘East London Photo Stories’.
East London photographer Johanna Neurath has ventured down Hackney’s Columbia Road nearly every Sunday for the past ten years to visit its flower market. Rather than depicting the obvious prettiness of people and their flowers Neurath turns her attention to the colour and pattern left behind as the market clears out, focussing on strangely beautiful displays in gutters, hazy reflections in windows and the abstract forms created by fag butts and polystyrene cups strewn across the road. This book fuses still life and street photography to celebrate the beauty and chaos of one of East London’s most famous markets.

A Hackney resident “since the 80s”, Johanna Neurath began taking photos of the east London markets as part of her job in publishing. “The photographs came from recording interesting colour combinations for book jackets,” she says. For a decade, Neurath was the self-confessed “crazy lady” who would take photos every Sunday, annoying stall-holders. Now collected in a handsome book,Columbia Road highlights the beauty of the flower markets and the ugliness of the detritus (cigarette ends, stomped-on plastic bags). For Neurath the sequencing was key. “It was a bit like making a film. There’s an element of trying to tap into the viewer’s unconsciousness and make them feel a certain way.”