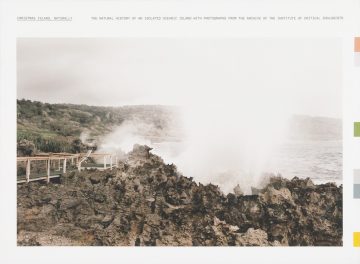 Christmas Island—a small volcanic outcrop in the Indian Ocean which was transferred from Singapore to Australia in 1958—underwent dramatic changes. Along with human settlers, several non-indigenous species alighted on the island disrupting the endemic biodiversity that had thrived undisturbed thanks to geographical remoteness and almost nil human interference. The accidental introduction of invasive species severely impacted a fragile ecosystem, imperilling the island’s wildlife and causing the extinction of a number of native species. As a result, extreme biocontrol strategies are currently being undertaken in an attempt to restore the island’s biodiversity. In the past two years, The Institute of Critical Zoologists has been researching the escalating chain of events brought about by the human presence on Christmas Island gathering a varied collection of research materials that merge factual and fictional elements. By surveying the impact of human beings on an endemic habitat, Final Report of the Christmas Island Expert Working Group maps out lines of invasion and retreat, it investigates dynamics of connectedness and isolation triggering reflections on states of vulnerability and conditions of survival in the age of globalisation.

About the Publisher
The Institute for Critical Zoologists aims to develop a critical approach to the zoological gaze, or how humans view animals. Urban societies live in relative isolation from animals; however, our demand and gaze upon them have grown significantly over the last century. It is undeniable that looking at animals is considered both desirable and pleasurable in societies. Animals convey meaning and values that are culture-specific, and in viewing the animal, we cannot escape the cultural context, political climate and social values in which that observation takes place. The relationship between animals and humans has reached an appalling state. There is increased visual exploitation of animals (there are more then a thousand zoos in the world and twice as many natural history museums); and there is exploitation of animals as commodity (tiger parts are traded for commerce to save them in China). Not to mention the environmental, ecological, cultural threats of zoos, animal performances, animal agriculture, poaching, economic-driven conservation biology, natural history museums displays and animal memorabilia, to which human anthropomorphism plays a pivotal role. We seek to develop a Critical Zoological Gaze that pursues creative, interdisciplinary research that includes perspectives typically ignored by animal studies, such as aesthetics; and to advance unconventional, even radical, means of understanding human and animal relations. The institute also discourages anthropomorphism in the appreciation and understanding of zoology
criticalzoologists.org