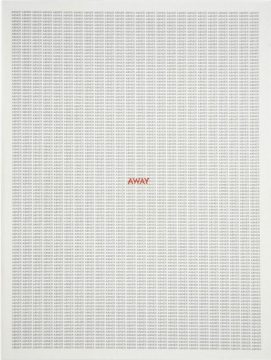 Abner Nolan’s contribution to the book series is entitled Away, and is created solely from found photographs. Through careful editing, Abner has combined photos of different formats and sizes into a fascinating recontextualization of history. Abner Nolan was born in Syracuse, New York in 1972. He received his MFA from the California College of Arts and Crafts in 1998 and currently teaches there as an adjunct professor.

Abner was an artist in residence at the McDowell Colony in New Hampshire in 2002. He received a Trillium Fund Award from Trillium Press in 2003, which allowed him to publish the limited edition book entitled, American Negatives. Working mostly with found photographs and negatives, Abner has exhibited work in the San Francisco Museum of Modern Art Artists Gallery, San Francisco Camerawork, and the Yerba Buena Center for the Arts in San Francisco. From 2001 to 2004, Abner was the gallery director and curator of Spanganga Gallery, located in San Francisco’s mission district. In 2006, he took part in the San Francisco Art Commission’s ‘Art on Market Street’ program, where his work was installed on 24 kiosks along the busy thoroughfare.