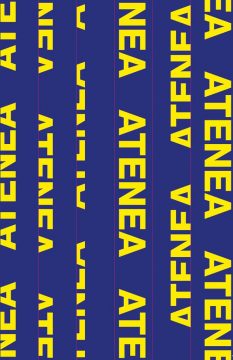 Atenea is a journey, at the same time both physical and symbolic, around a Europe marked by depression and disillusionment. Far removed from the hungry gaze of a news gatherer, the photographer Roger Grasas offers us a vision of a mysterious and disturbing Europe, scattered with scenes in which animate and inanimate beings hold a dialogue in an encrypted language. Having set off on a sort of situationalist dérive, the author crosses the old Continent as an observer, in the style of a flaneur, a true Homo Ludens, taking delight in the unexpected to be found among the visible signs he stumbles upon, turning the ephemeral path traced across the map into a board game of his own invention. At the starting point of its excavation into very foundations of the Western world, Atenea chooses the headquarters of the European Central Bank in Frankfurt, the epicenter of current political events. The tour reaches its end two months later at the feet of the Parthenon in Athens, thus closing the gap between the contemporary “temple” of financial speculation on the one hand, and the Greek temple of art and wisdom on the other. It is a journey from North to South, from the rich Europe to the poor Europe, from the contemporary crisis of values to the original value of ideas. In order to cover the distances required for this journey, the artist used nearly all the possible means of transport, from the most modern to the most primitive: planes, trains, cars, ships, bicycles… He ran the final stretch from the town of Marathon to the Parthenon, echoing the trip of the heroic messenger Philippides, whose run occurred during the Century of Pericles, a period in which art, philosophy and politics soared to their greatest heights. Roger Grasas thus brings the project to an end by evoking history through a physical act that in turn brings about a symbolic transformation of the territory. The trip resulted in a collection of 60 photographs that document the impression left by passages from the built city to the “non-places” of postmodernity. They are silent images that are content to pose questions rather than offer any answers.

About the Artist
Roger Grasas was born in Barcelona in 1970. Began his professional career as a photographer in 2005 documenting projects for intl. foundations. Since then, traveling has become the core of his artistic work, translating his experiences and reflections into visual arts. As of 2009, he started a new stagein the Persian Gulf region. Between 2010 and 2017 he moved to Middle East where he developed his long term landscape documentary projects ‘Min Turab’ and ‘Ha Aretz’ The speech of Roger Grasas focuses on the reflection on the Nature-Culture dichotomy and presents the experience of the trip as the guiding thread of the same project, transferring his experiences and reflections to the field of visual arts. The core of his work investigates the connexions between history and territory, the role that technology shows within the postmodern digital society and the state of alienation and confusion experienced by the human being in the context of the contemporary landscape.
rogergrasas.com

About the Publisher
RM is one of the most renowned publishers of art books in Latin America. Proof of this are the more than 150 titles dedicated to artists and writers of international stature such as Martin Parr, Julio Cortázar, Daido Moriyama, Luis Barragán, Diego Rivera, Frida Kahlo, Jeff Wall, Pablo Ortiz Monasterio, Paolo Gasparini and León Ferrari, to mention just a few. Oriented mainly towards photography, contemporary art and the treasures or “oddities” of literature, RM has been characterized by the careful care it puts into each of its publications, not only in terms of content, but also in the design and the typography, the thoughtful selection of the papers and materials, the detailed supervision of the production. Another aspect that distinguishes it is that it has a wide distribution network that disseminates its publications in most of the world.
editorialrm.com