an error has occurred 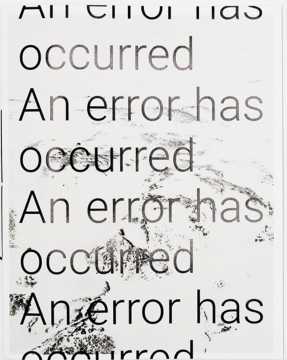 An error has occurred is the major new book project by Melbourne-based photographer Rohan Hutchinson. The publication is based around a core series of large-format photographs that Hutchinson took during an expedition to the Arctic in early 2017. The focus of the expedition was to record and document the beauty, immensity and diversity of the Arctic landscape in this particular moment. Upon returning to Australia, Hutchinson set about reinterpreting and expanding the scope of resulting photographs in a bid to respond to the impact of climate change on the Arctic region and address our responsibilities not just as Australians, but as global citizens.

The final works comprise of two components. The first is a series of large-format photographs that capture the beauty, enormity, tonality and specificity of the winter landscape. The second is a series of physical and chemical reworkings of these photographic prints. Executed in Australia, this series saw Hutchinson re-sensitise the original C-type photographs with photographic emulsion liquid and expose them to the harsh Australian sun. Pared with their originals, the works reveal a ravaged, blackened arctic landscape. The works act as both a poignant allegory for the global resonance of our actions and as a précis on the limits and potentials of the photographic medium, taking Hutchinson’s research-based practice to new creative terrains in the process. An error has occurred – which follows Hutchinson’s previous artist books A Brief Stroll Whilst Inspecting Architecture (2014), Elemental (2016) and The City in Itself (2017) – is a significant publication featuring more than 20 images and an essay by writer, editor and publisher Dan Rule.

About the Artist
Rohan Hutchinson is a Melbourne-based photographic artist whose work questions the transformation of space and our relationship with the environment.  Hutchinson has designed and released several artist books, working with publishers such as the Velvet Cell (2017) and Perimeter Editions (2018). Their books have been exhibited at Art Book fairs including Paris Photo LA, Off-print Paris, Off-print London, Unseen Amsterdam, New York, Tokyo, UAE, Melbourne, Sydney and have been shortlisted for the NGV Cornish Family Prize for Art and Design Publishing 2019, Libris Art-book of the year 2016, and Australian photo-book of the year 2016.

About the Author
Dan Rule is a publisher, writer and editor from Melbourne, Australia. He is the co-director of Perimeter Books, Perimeter Distribution and Perimeter Editions, for which he has published, edited and written for upward of 50 books on contemporary photographers and artists from around the world. Dan was a longstanding visual art critic for Melbourne newspaper The Saturday Age, a design and architecture columnist for The Age, the former editor and editor-at-large of Vault magazine and the former co-editor of Composite Journal. In a career spanning 20 years, he has published more than 3000 articles, reviews and interviews on art, photography design and culture more widely for publications internationally, including major critical writing commissions for institutions including the National Gallery of Victoria, Art Gallery of New South Wales, Camera Austria, Centre for Contemporary Photography, Australian Centre for Photography and others.