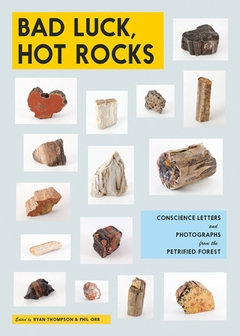 The Petrified Forest National Park in Northeast Arizona protects one of the largest deposits of petrified wood in the world. Despite stern warnings, visitors remove several tons of petrified wood from the park each year, often returning these rocks by mail (sometimes years later), accompanied by a “conscience letter.” These letters often include stories of misfortune attributed directly to their theft: car troubles, cats with cancer, deaths of family members, etc. Some writers hope that by returning these stolen rocks, good fortune will return to their lives, while others simply apologise or ask forgiveness. “They are beautiful,” reads one letter, “but I can’t enjoy them. They weigh like a ton of bricks on my conscience. Sorry…” Bad Luck, Hot Rocks documents this ongoing phenomenon, combining a series of original photographs of these otherworldly “bad luck rocks” with dozens of facsimiles of intimate, oddly entertaining letters from the Park’s archives.

Ryan Thompson lives and works in Chicago, IL where he is an artist and Assistant Professor of Art & Design at Trinity Christian College. His current research examines various powers humans ascribe to the events and ephemera of the geologic. His essay “The Dark Flight of Micrometeorites” was published in Making the Geologic Now (Punctum Books, 2013).
www.departmentofnaturalhistory.com

Phil Orr loves building things, particularly out of the discarded, salvaged, unwanted, or forgotten. Much of his work focuses on these objects and the complex relationships surrounding them. He makes a living as a carpenter in Urbana, Illinois where he lives with his growing family.

The Ice Plant is a publishing house based in Los Angeles, producing artist books and other printed matter since 2006.