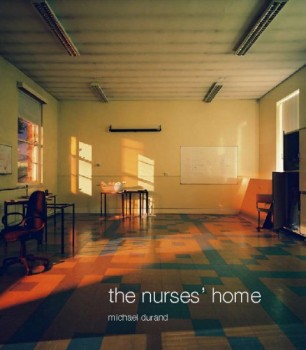 Commissioned by MCO Projects. A photographic record of the nurses’ training hospital prior to its demolition in 2008. The work incorporates archival images projected and re-photographed in situ. Produced as a limited edition hard cover book and framed photographic prints.

The artist, Michael Durand developed his approach through conversations and consultations with the commissioners and staff of the Mater Hospital. It was apparent that this iconic building, and the memories contained within it were significant to the history of the hospital and it was important that these were recorded before it was too late. The work in part grew out of the large photographic archive of images, of the staff, nurses and trainee nurses, made in and around the building over the past five decades.  These historical images were photographed and then projected back into the space and re-recorded creating a kind of memory loop of an image within an image.

About the Artist
Michael Durand is a visual artist working primarily with photography. He has exhibited in Grenoble, Paris, Dublin, and Waterford among others.
His work has been purchased for public and private collections. He is based in Ireland.

About the Publisher
Since its foundation in 1938, Nicholson Bass has grown to become one of Ireland’s leading colour printers.