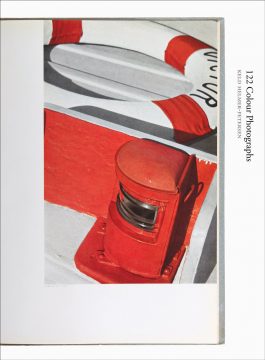 While the rise of color photography as a viable artistic medium has often been credited to the celebrated work of Willam Eggleston and Stephen Shore in the 1970s, their efforts had in fact been preceded by almost two decades by the Danish photographer Keld Helmer-Petersen (born 1920). Helmer-Petersen’s 1948 publication of 122 Colour Photographs stands as an extraordinary accomplishment: inspired by the realism of the Neue Sachlichkeit movement, Helmer-Petersen concentrated on the mundane and the everyday, generating a panoply of geometric abstractions out of curved doorknobs, crates of tomatoes, industrial metal drums and straw-colored buildings against milky blue skies. With this reproduction, accompanied by an essay by historian Mette Sandbye, 122 Colour Photographs can at last assume its proper role as the foundational book that successfully put color photography on the map and brought modernism into Danish photography.

About the Artist:
Keld Helmer-Petersen (August 23, 1920 – March 6, 2013) was a Danish photographer who achieved widespread international recognition in the 1940s and 1950s for his abstract colour photographs.