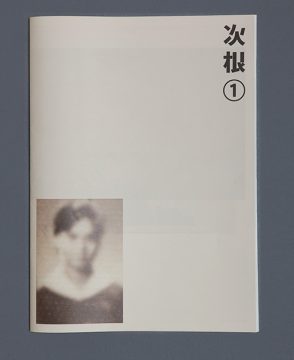 The theme of Lateral Roots’ issue 1 is “Photographs within Photographs”.
In the past, the act of taking photos and their subsequent display had a ceremonial feel. Family photographs were usually placed in prominent positions in the house and represented the family history, memories, and visions. Photographs taken at home were often of festive or solemn occasions such as weddings or family reunions. As photographic technology advances, the photograph is no longer such a valued object, and has become a flattened JPEG. When we digitally scan these
old photographs, two parallel moments in time appear on the screen. In the blurry photo within a photo, we can still vaguely discern ash-colored landscapes or make out the features of a person. The blurriness of the blown-up image is an evidence of photography’s unique existence as a medium.
The zine is designed in the format of similar as newspaper (without binding). The viewer could take any page out of the whole book, in order to take in a full view of related images on the full cross-page.

About the Artists
Yuanyuan Yang (b. 1989, Beijing) lives and works in Beijing. She received a BA (Hons) in Photography at the London College of Communications, University of the Arts London in 2013. Yang’s practice involves various mediums, mainly concentrating in photography, at the meanwhile including video, performance and text. Yang’s projects usually began with intensive historical research, by experimenting different ways of visual-storytelling, she creates the narrative where fact and fiction coexist to speak about topics such as memory, history and time. In recent years, she described her way of working as ‘weaving‘: to create the structure of a complex web or system by ‘weaving’ different types of images into ‘image atlas’ together with text. The works are usually presented in the form of artist books and photography installations.
lukayangworks.com