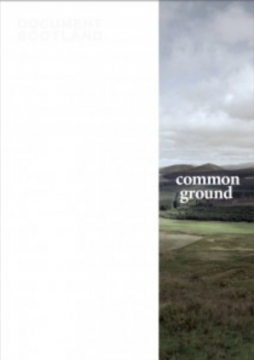 Common Ground was published to accompany the exhibit held at Street Level Photoworks, Glasgow.
Including two photo essays from each Document Scotland member, Sophie Gerrard, Jeremy Sutton-Hibbert, Colin McPherson and Stephen McLaren, ‘Common Ground’ takes a look at contemporary Scotland as the country stands on the verge of making a political decision which, whatever the outcome, will resonate through the ages. From the common riding festivals of the Scottish Borders to the women farmers who work the land, a walk along the Scottish-English border or a car road trip through the streets and daily life of Scotland, this publication showcases new projects completed with assistance from Creative Scotland, for our current Street Level Photoworks exhibition. This publication also introduces work by the Welsh photography collective A Fine Beginning – James O Jenkins, Abbie Trayler-Smith, Gawain Barnard and Jack Latham, work which can also be seen in the ‘Common Ground’ exhibition.

”Set against many of the great historical events of the age, Scotland has a rich tradition of producing outstanding work by a multitude of committed, passionate and skilful photographers. Reflecting society as a whole, Scottish photographers have been part of the great global waves of exploration and emigration which has defined Scottish life over the last two centuries. In addition, Scotland has provided a canvas for many celebrated international photographers who have used the country as a backdrop to make their own work.

It is with this sense of a place and history that we have established Document Scotland.

Colin McPherson, Jeremy Sutton-Hibbert, Sophie Gerrard and Stephen McLaren are four Scots-born photographers, each exponents of documentary photography in our own individual ways. We have lived and worked extensively both at home and abroad. Our work has been published in the pages of some of the most important international magazines, we have won numerous awards and exhibited internationally. We are passionate about documentary photography and we are committed to photographing Scotland.”