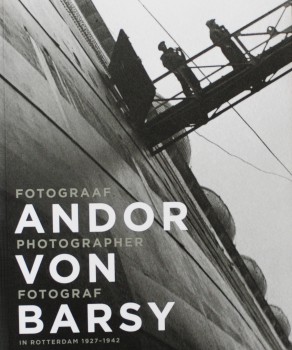 Though known mostly for his films, the German-Hungarian photographer Andor von Barsy’s (1899 – 1965) began in 1930 to take dynamic photos of the harbors of Rotterdam, aiming his camera at cranes and bridges to capture a dynamic image of modern steel construction. This groundbreaking exhibition catalog commemorates the first public showing ever of these vital, almost-abstract photos from the eye of an early modern artist. Von Barsy’s best-known movies (such as 1928’s De stad die nooit rust and 1930’s experimental Hoogstraat) are featured at the International Film Festival Rotterdam 2011. The impeccably printed catalog includes around 100 photographs, with an introduction by art historian and critic Frits Gierstberg, head of exhibitions at the Nederlands Fotomuseum in Rotterdam.

About the artist:
The Hungarian Andor von Barsy (1899-1965) made his name with the abstract ‘urban symphony’ “Hoogstraat – an absolute film” (1928) and was a popular cameraman and photographer. For his filming of “Dead Water” (1934, Gerard Rutten) he received the prize fort the best camerawork (Venice Film Festival). Von Barsy was one of the cameramen for Leni Riefenstahl’s Olympia (1936/38).

About the publisher:
Jap Sam Books is an independent Dutch publishing house specializing in architecture, art, philosophy, design and theory. Jap Sam Books has been established to reflect, connect and respond to developments in these fields, by bringing out a range of critical and reflective books for an international audience. The books that we publish are not only educational and inspirational, but also very beautifully designed, and all produced in close collaboration with our contributors.
japsambooks.nl